After two days exploring the Austrian Capital, Vienna, our final day was to cross the border with Slovakia and explore their capital Bratislava, less than an hour away centre to centre.

Although Austria is firmly classed as Western Europe, most of its borders are with Eastern European countries, which even twenty-five years after the fall of the Berlin Wall are still much less developed - as I had found when I visited Graz four years earlier.

Arriving by train in Bratislava, it had taken less than an hour, and yet it felt as though we had travelled fifteen years into the past - despite this city being on the border with Austria. Dilapidated, broken, full of trolleybuses and communist architecture, it may have been developed, but it felt a world away from where we had just came. 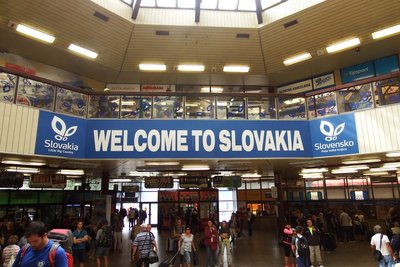 Leaving the station, with it's big sign welcoming us to Slovakia, we headed towards our first sight - Slavín, the War Memorial located on one of the largest hills just outside the city centre. 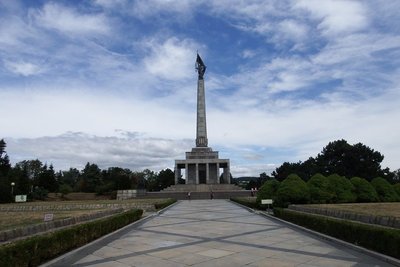 After a short walk up the staircases and roads climbing up the hill, we arrived at the top for views over the city and of the impressive monument, before we made our way back down and to outside the Presidential Palace. 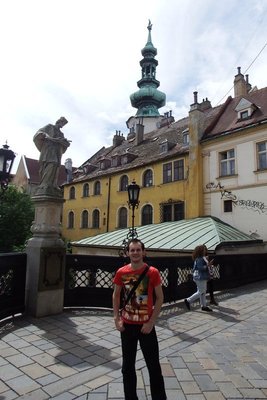 The next area to visit was the heart of the city centre, and after walking through the Michael's Gate, we arrived in the busy centre full of shops and cafés. Making our way through the city streets we passed busy squares before arriving at the Hviezdoslav Square, outside the Opera House. 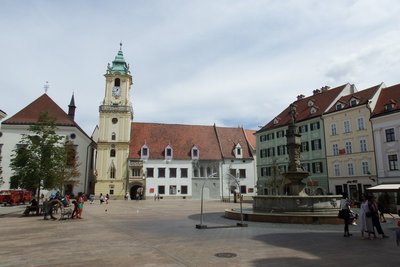 By now we had seen much of the city, with our next sight being the icon of the city itself - the castle. Located on top of an imposing hill over the River Danube, we climbed up to the top where it was incredibly windy - so much so that even the courtyard of the building felt like a wind tunnel.

After a look around the grounds, we then made our way back down towards the bridge crossing the River Danube, and with it, I had met the Danube in each of the capital cities along the river, Budapest, Belgrade, Vienna and finally Bratislava. 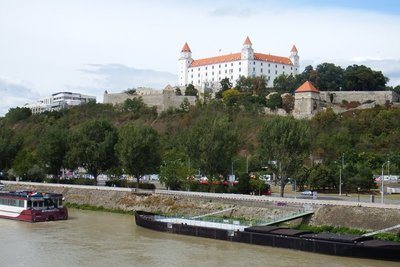 Castle over the Danube

After photos of the castle over the river, we quickly made our way to the nearest bus stop so that we could catch the next train back to Vienna from the other station on the south side of the river - and the only one on the tiny portion of Slovakian land located west of the Danube.

Running across a flyover to get to the bus stop, we made the short journey to take the train back to Austria in enough time. Once the train left the station, it wasn't long before we headed out of this suburb and crossed back over the Austrian border. Less than an hour later we were back in the Austrian capital - two of the closest capitals geographically, and yet world's apart in time.

After going back to the hotel for a lovely rest, we decided to have a traditional Austrian meal again tonight. After researching we found a restaurant in the city centre of Vienna, and headed there shortly after. Passing some restaurants with queues on the street, we were relieved to find ours was nice and quiet. Traditionally styled with wooden tables, we both had schnitzel and shared a apple strudel, as the restaurant got busier and busier, eventually surrounding us entirely by Asian girls. Clearly cheap traditional food is a staple of any Japanese holiday! 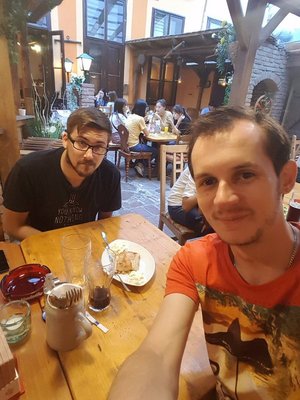 After a lovely finish to our holiday, we went back to the hotel to chill and get ready for the flight back the following morning.

The holiday was much quieter than the last few, yet still kept us busy and gave us lots to see - the large Austrian capital as well as a short excursion over the border to it's smaller Slovakian cousin.